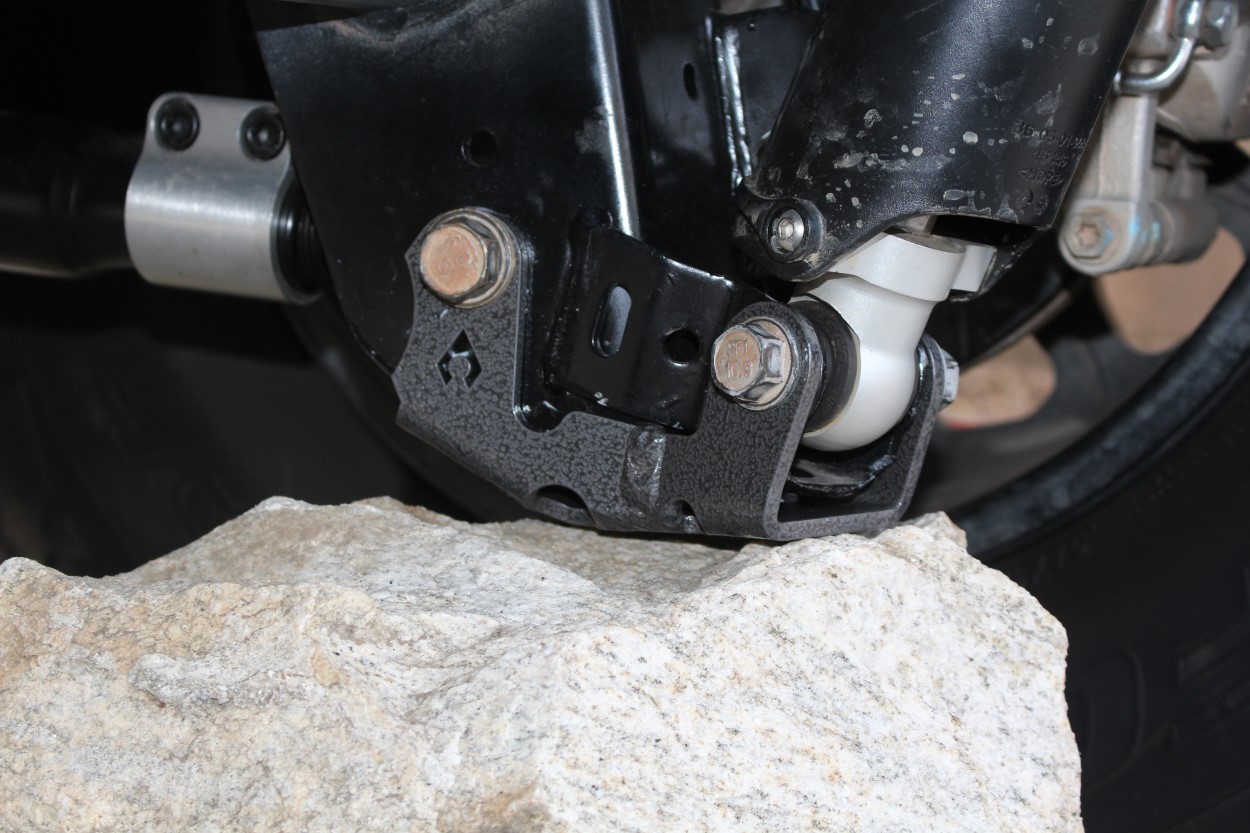 These heavy-duty skid plates from Artec Industries are made from a 3/16″ thick boxed steel plate for strength and impact resistance. They protect and beef up the factory brackets so you won’t have to worry about damaging them on the trail. The rear lower shock mounts can crack and break easily when smashed on rocks enough times. The integrated skid plates wrap around the joints and shocks, protecting them from direct impact and decreases premature wear on the joint.

Plus, these skids come with a 2-stage hard powder-coated finish for long-lasting protection. It is a quick and easy installation utilizing factory hardware. 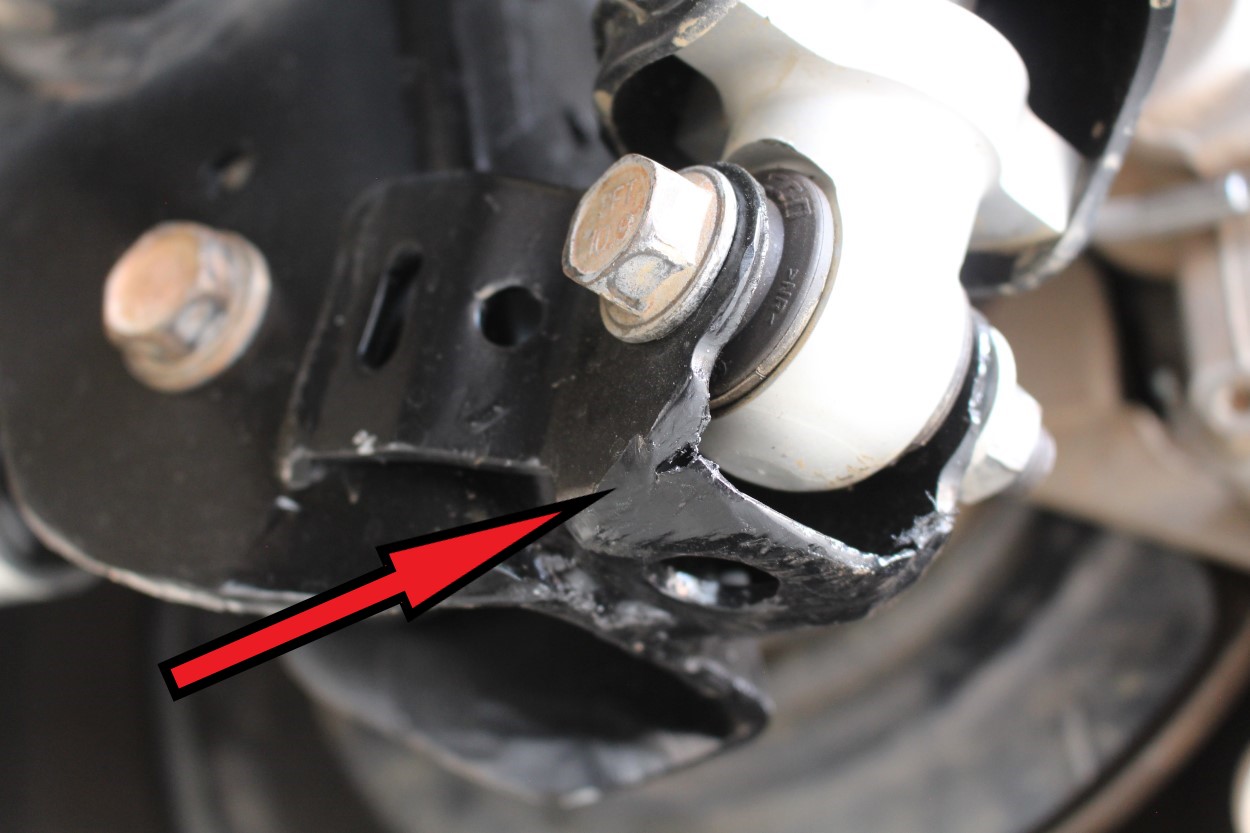 Here is an example of what can happen without having these skids. You can see the rear lower shock mount bracket splitting apart from being smashed on rocks. This has been cleaned up and painted, but you can still see the cracking. Once these OEM brackets get hit a few times, it will be harder to get the skids installed. The use of a mallet or floor jack might be required to get the skids to fit on after the OEM LCA/Shock brackets get deformed by trail damage. 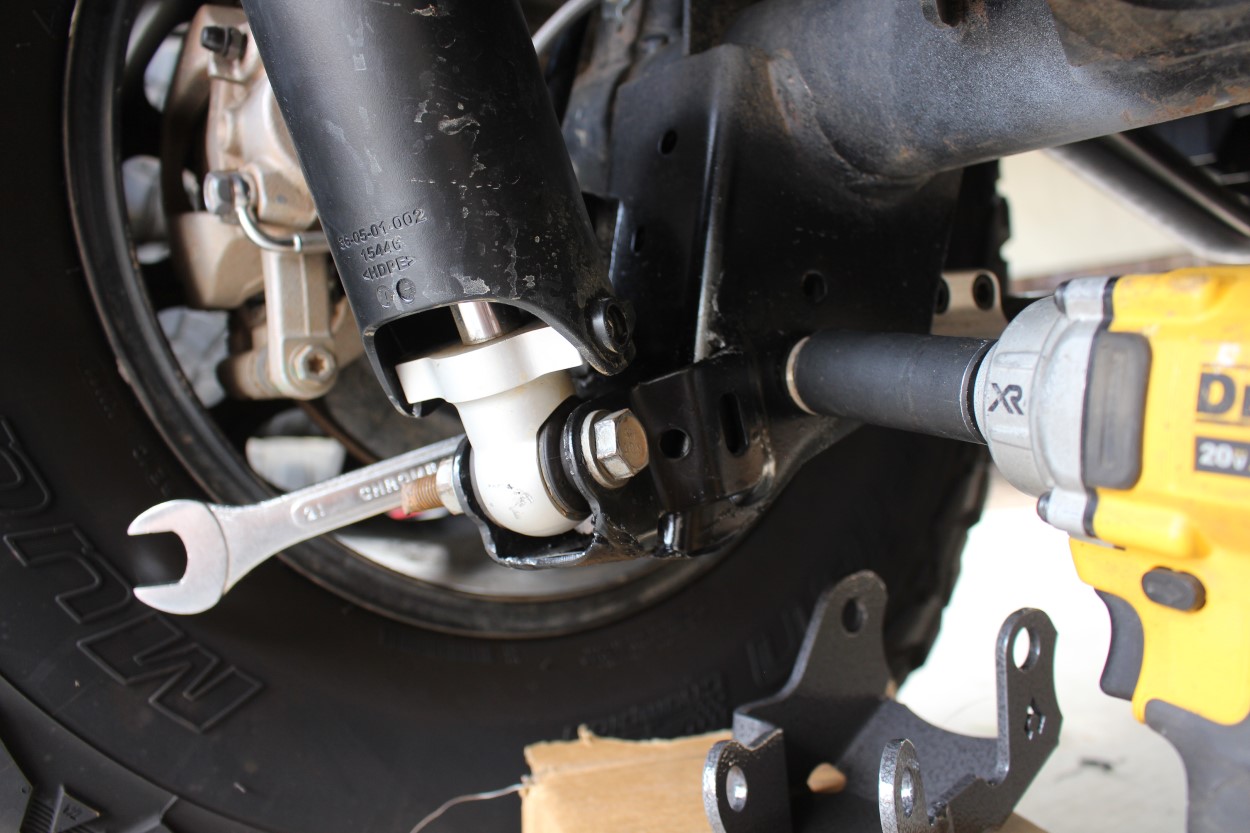 This is an easy install if you haven’t already damaged the OEM brackets. First, pick a side to start working on. Then remove the hardware from the rear axle lower control arm. It will require a 21 mm box wrench and socket.

Once the LCA bolt and nut are out, grab a large standard screwdriver. You will want to jam the screwdriver between the bottom of the shock and the top of the bracket. This will help keep the shock in place once the bolt is removed. Otherwise, it will expand and may be difficult to line back up. Then you can remove the lower shock hardware with an 18 mm box wrench and socket.

Step 3. Set In Place The Skid

Now while the screwdriver is holding the shock in place, you can set up the skid. Line up your rear lower control arm and the new skid, then slide in the OEM LCA Bolt that you removed earlier with the 21 mm. After that bolt is in, slide in the OEM Lower Shock Bolt that you removed earlier with the 18 mm. Then you can remove the screwdriver. Make sure that the nuts will end up on the tire side and not the differential side of the brackets. They will easily get ground down by rocks if installed in reverse. 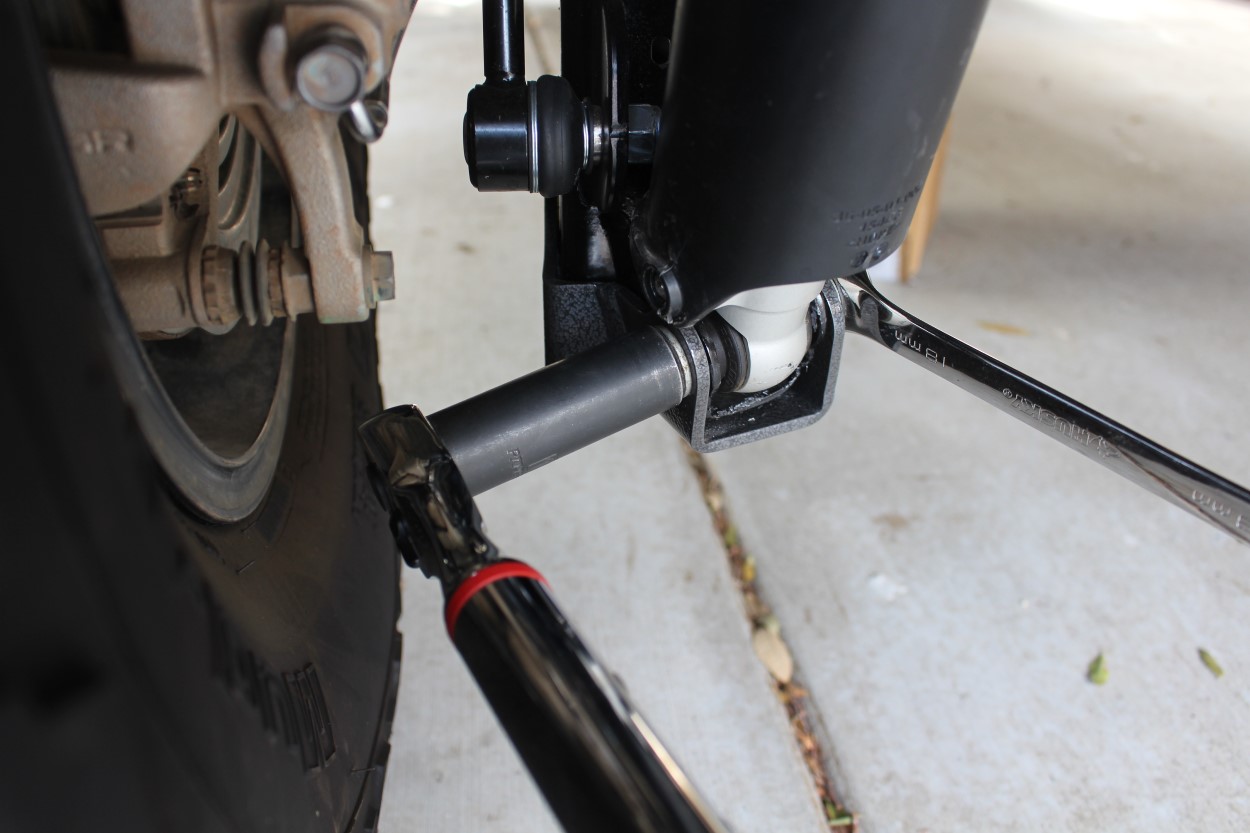 Install the nut by hand on the rear lower shock mount bolt. Then tighten the nut down with an 18 mm socket while holding the bolt with an 18 mm box wrench. Torque the nut to 75 ft-lbs. 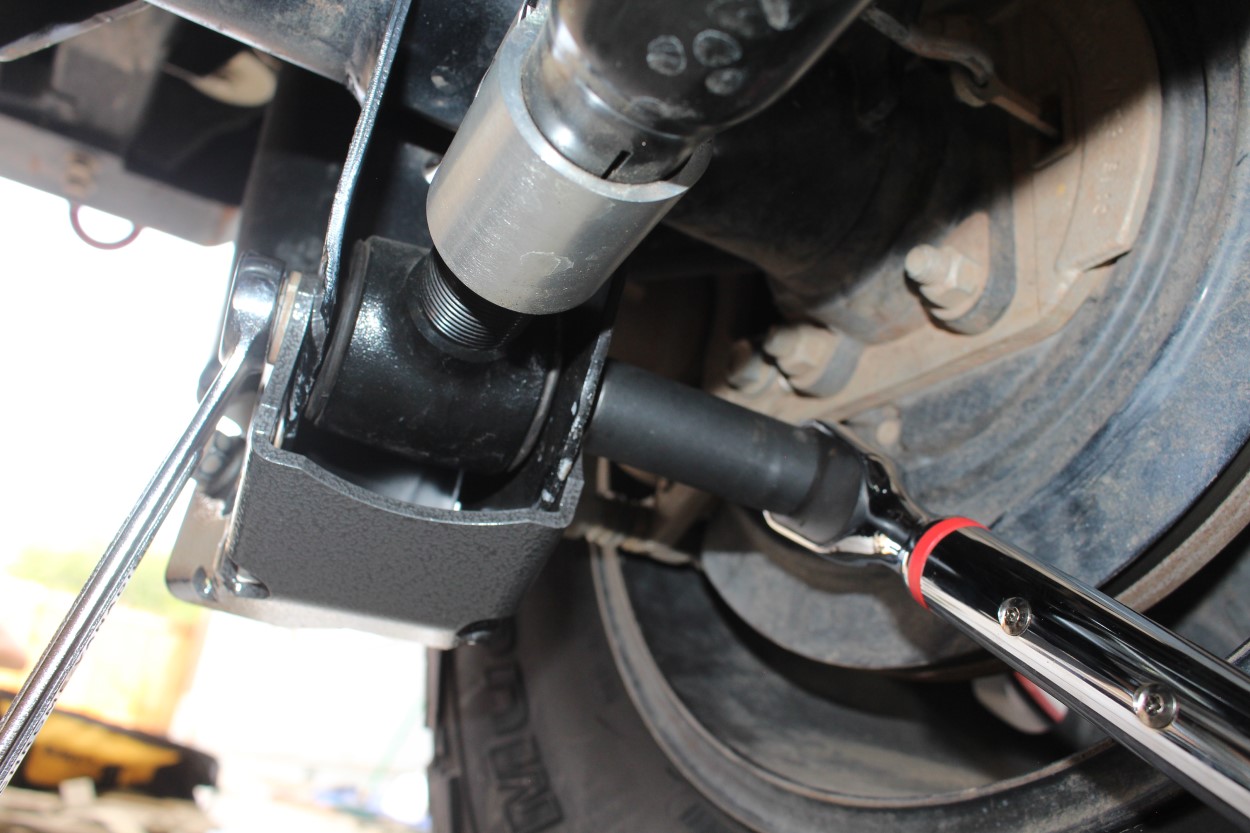 Install the nut by hand on the rear lower control arm bolt. Then tighten the nut down with a 21 mm socket while holding the bolt with a 21 mm box wrench. Torque the nut to 90 ft-lbs. 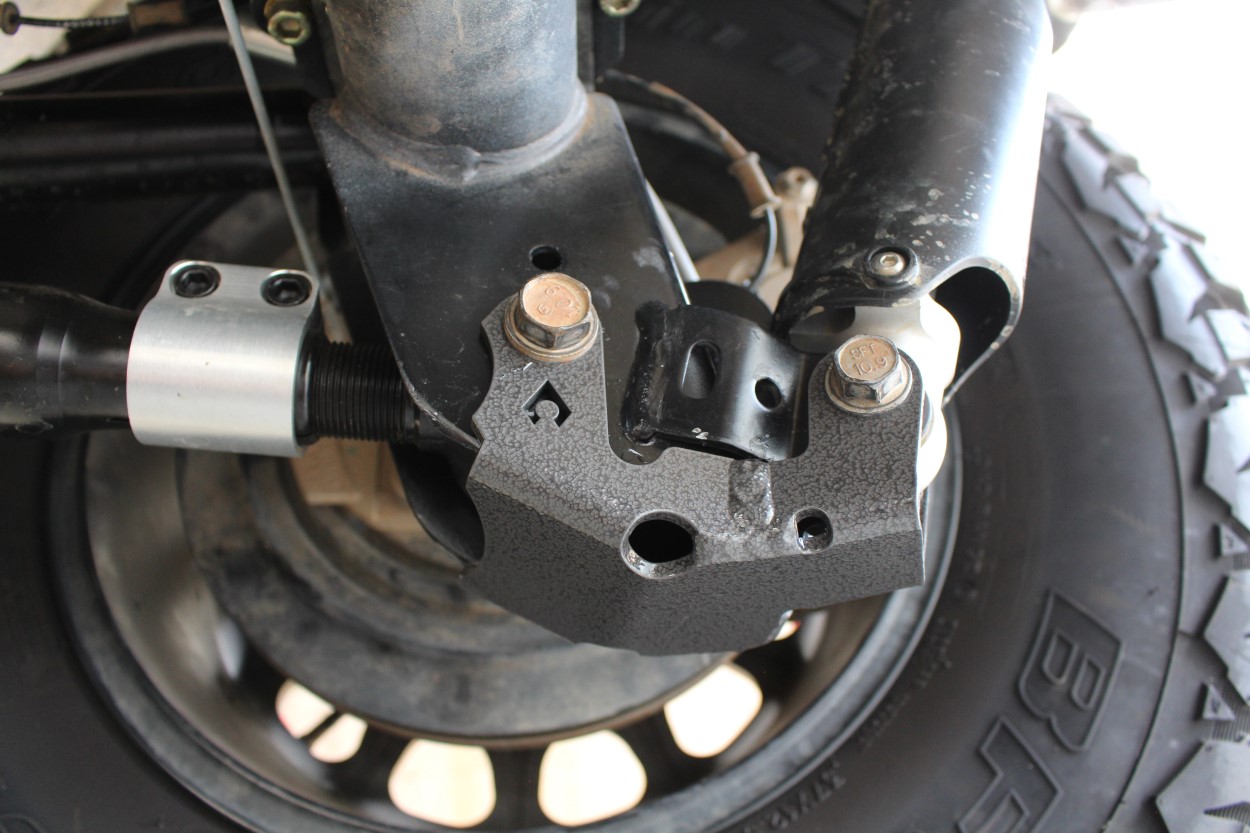 Once you have both of those nuts torqued down, you can repeat steps 1-5 on the other side to complete the install. 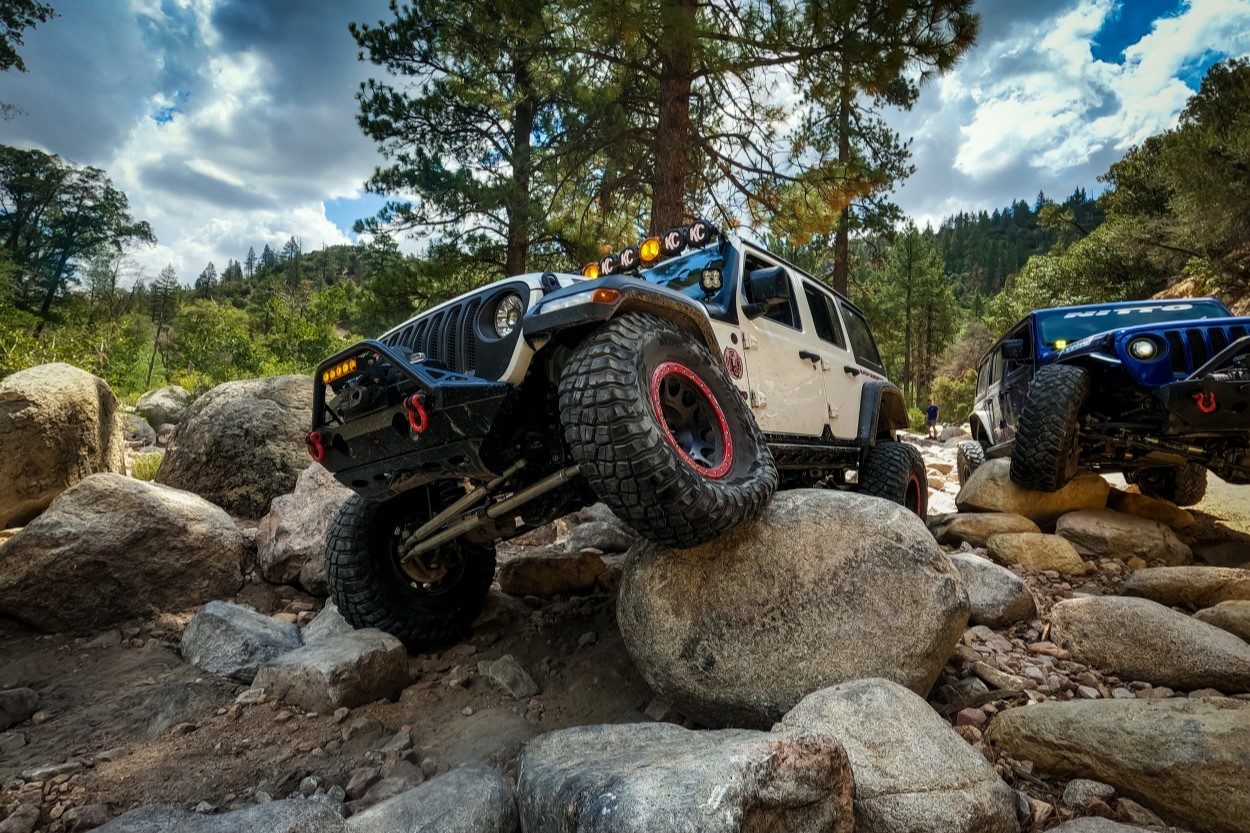 This simple install is a very important one. Try to capture this before you damage your OEM brackets. Otherwise, you may need to do some bending, hammering, and pressing with a floor jack to get these skids installed. They not only provide protection but also reinforce the OEM brackets.

The final step is to go out and beat them up on the rocks! Have fun out there and be safe!

I have been Jeeping for over 20 years and love wrenching, wheeling, fishing and camping. Taking the Jeep out to a remote location to camp and fish with the family is a perfect trip.